﻿ How I love Christmas and the lights and celebrations that the shortest day has been and gone. It's been a remarkable year and so many highs from Zev winning his second championship certificate, winning the medium pro-plan finals and several qualifying classes plus being a reserve for Team GB and England. Marc with Dixie winning her first championship certificate and qualifying for the semis. Marc with Mister Bigs having 2 wins and 2 seconds at the WAOs in Spain and coming second at a Olympia.  A fantastic achievement and with are so fortunate to have our journey with them.
Raz and Wings enjoy their retirement. Wings is happy with the telly and other pleasures whilst the grace of Raz as he continues to cope with his lack of sight is humbling.

And with Nuts I feel very much like the fable of  'King Canute' who tried to hold back the tide.   I fight a constant battle against the ravages of time for Nuts with physio and food and anything else that means he has the best quality of time and life. With his ups and downs over the past two years I really do believe you know when it's time for them even if that time would never be right for me as it would always be far too soon.
Beautiful Bear is now over a year old, he is as cheeky as he irrepressible, terrific with all the guys and leads me a dance so merry that he constantly makes me smile. Then Beautyoli after such a brilliant start at Easter developed only what I can liken to as stage fright.  I had to pull her out of agility for 2013, which was incredibly disappointing.  As Marc said 'the genius of Rivi is destined to be unknown'.

So Christmas, we can celebrate and look forward to 2014 with excitement already as Big, Dixie and Zev have all been selected for the Team GB squad. (We did not try out for the WAOs for 2014.) Plus Zev and Dixie at in the Agility championship Classes at Crufts 2014. And as Bear watches fascinated by the ritual of us putting up the Christmas decorations and we think of the joy as he spends his first Christmas with us and Nuts magically spends his 13th....... 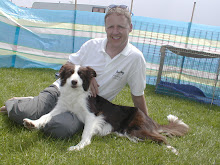